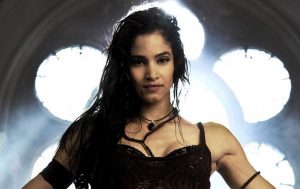 Though she started off dancing at a very young age, Sofia started acting at the age of 17 when she worked alongside the famous Spanish choreographer Blanca Li. Her early work was that of dancing, showcasing her talents in everything from films to concert tours. Most of her dance techniques came in handy when she played the lead in the dance movie StreetDance 2 (2012). Desiring not to be one-note, she soon sought smaller roles that were not as heavy on the dancing.

If Sofia looks familiar but not too familiar, it’s because she has starred in quite a few roles where she puts on a lot of makeup special effects. She portrayed the alien warrior Jaylah in 2016’s Star Trek Beyond and would then don the look of a decaying monster in 2017’s The Mummy. That being said, you can spot her in a more natural state of beauty in the likes of Kingsman: The Secret Service, Atomic Blonde and Hotel Artemis.