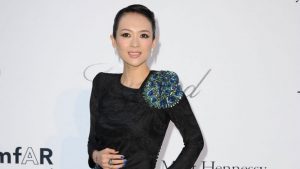 Zhang Ziyi rose to international notoriety rather quickly considering she went from her acting debut in the sleeper picture The Road Home (1999) and then went onto star in the martial arts hit Crouching Tiger, Hidden Dragon (2000). As Chinese martial arts pictures started to gain traction during the early 2000s, she appeared in a number of notable films at the American cinema, including Rush Hour 2 (2001), Hero (2002), and House of Flying Daggers (2004). She would’ve been more awards-nominated pictures Memoirs of a Geisha (2005) and The Grandmaster (2013). Among her accolades she has also spent several years in the top 5 of Forbes China Celebrity 100.

Ziyi has been dancing since as young as the age of 8 and found her time at boarding school to be aggravating. She would later get into television at the age of 16 and at age 17 entered into the Central Academy of Drama in Beijing. Currently, you can catch her in the latest Godzilla saga of Godzilla (2014) and Godzilla: King of the Monsters (2019), as well as the upcoming Godzilla vs. King Kong (2020).