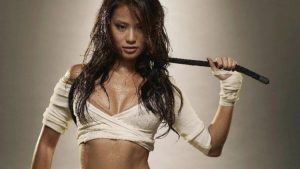 For an actress who started off in reality television, Jamie Chung has astoundingly proven there can still be life in an acting career after being within such a trashy genre of television. Her early days of starring The Real World: San Diego (2004) are now more behind her after she took on roles in Dragonball Evolution (2009) and Grown Ups (2010). While they may not have been the best displays of her talent, she would soon be attached to the more notable pictures of The Hangover Part II (2011), Sucker Punch (2011), Premium Rush (2012) and Big Hero 6 (2014).

Chung would later play the lead on TV’s Samurai Girl and finally receive some stronger acclaim as for her film role in Eden (2012). Of course, her most notable television appearances were that of Mulan on the urban fantasy Once Upon a Time as well as the mutant blink on the superhero show The Gifted. She has also won a few awards, including the Golden Space Needle Award for Best Actress for Eden.