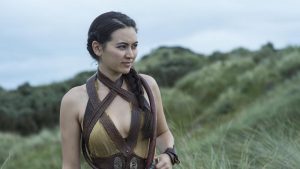 Henwick, born from a Chinese Singaporean mother and Zambian English father, made waves when she became the first East Asian actress to hold a lead role in a British series for playing Bo on the adventure series Spirit Warriors (2009–2010). Since then, she has taken on a number of fantastical TV roles. Her most notable would easily be that of Nymeria Sand on Game of Thrones and Colleen Wing in the Netflix Marvel series of Iron Fist, The Defenders and Luke Cage.

Henwick has dabbled in a little bit of everything. Her television career has included small and recurring roles on such programs as The Thick of It, Silk, and Lewis. She has appeared on stage in a production of Running on the Cracks. She even has radio credits on a few series, including a radio drama of Silk. Henwick’s movie career is just starting to take off, having been attached to small roles in Star Wars: The Force Awakens (2015) and Underwater (2020). She will become a bit more notable in future with her upcoming roles in Godzilla vs. King Kong (2020), Monster Problems (2021) and The Matrix 4 (2020).